There is an old joke that says that a Methodist is just a Baptist who can read, and a Presbyterian is just a Methodist with money (although that could also be an Episcopalian). Well maybe there's something to that, at least the last part. Here is a graph from the Pew Forum ranking denominations on percentage of college graduates and families with household incomes over $75,000. (click on the image to enlarge it.) 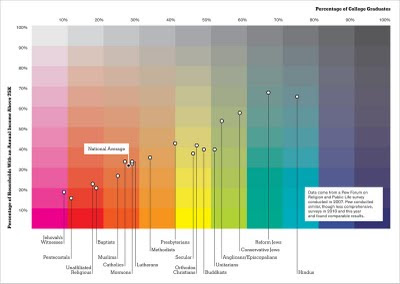 I don't think the results are totally unexpected. For those surprised by the Hindu's at the far end, this is only based on Americans. The one that surprised me was Mormons. Based on my experience in the southwest I would have expected them to be higher in both categories.
Posted by John Nash at 11:00:00 AM No comments:

Well it's been more than two months since I last posted and those two months have seen a lot of changes and a lot of stress.

First, as many of you know, I am now a pastor in New Mexico having left New England in order to come back home. The packing, the move and the unpacking have certainly dominated my time and is one of the reasons why I have not been active on the blog.

But, in addition to what comes with having to move across the country, I was also having some major medical concerns. I went to the ER twice with a kidney stone the week after Ash Wednesday. In the scan of my abdomen to confirm the stone, they found a spot on my liver and also some spots on my hip bones. This engendered some concern on the doctors, and so since then I have had 3 MRI's, a bone scan, two endoscopy's and a colonoscopy, which I am sure has not made my insurance company very happy. Although I give thanks that I actually had insurance, if I didn't I don't know what would have happened.

In the end the spots on the bones are things that are like freckles, who knew. They know what the spot on my liver isn't, but they have no idea what it is, but they are not concerned at the moment. Which I give thanks for as well because the worst case for either situation was not good. I do have a fatty liver and am being told to change my diet, and while I would like to, I am not yet fully ready to commit to doing that just yet. But I will be seeing a nutritionist at some point in the near future to find out what all that will entail.

So, now I am in a new church, in a new state, with a somewhat clean bill of health and hope to returning to posting on this blog at least once a week again. I know I've said that in the past, but this time I mean it....
Posted by John Nash at 12:31:00 PM No comments: