Magic trick… When I saw that trick done by an actual magician at the state fair, I immediately thought of this message and the idea of envy, because, honestly, I envied the fact that he could do the trick, and thought how cool would it be to be able to do that in front of you all and have you envy me, except that I can’t actually do the trick because I don’t know how to make the actual coke disappear. And so all I could do was to be envious. Envy can be useful, in that it can lead us to be better, then is my envy of the magician could lead me to actually go out and learn how to do those tricks to, and it’s been said that there is no ambition without a little bit of envy attached, but it can also be destructive. Destructive to ourselves and also destructive to others. And all of us have this sin of envy within us. All of us have been envious of someone else at least once in our lives, and this is a universal trait as I read this week that every known language in the world has a word approximating what we understand as envy.  Envy lies at the root, or at the very least is a part, of many of the other deadly sins that we have spent the last six weeks looking at, and envy is unusual in several ways. 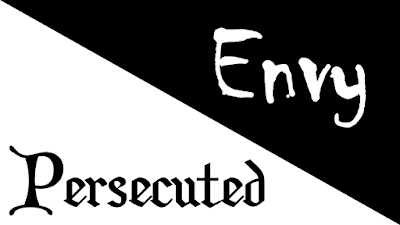 The first is that envy is always directed at someone else, which is not true of the others, because even lust can be directed at an inanimate object, rather than at a real person. The other thing about envy, according to Joseph Epstein, is that “Of the seven deadly sins, only envy is no fun at all.” Now one of the things that I’ve been surprised about in my reading for this series is that although the Seven Deadly Sins came out of the Christian monastic community, and were finalized and promulgated by Pope Gregory the Great, there are a lot of Jewish writers writing on the seven deadly sins.  Epstein is also the one who coined the term virtucrat which he defines as "any man or woman who is certain that his or her political views are not merely correct but deeply, morally righteous in the bargain.” I think that fits well into the idea of how people often think about suffering, as well as envy, because I think the best definition for envy, and the reason I matched it up with Jesus statement that blessed are those who are persecuted for righteousness sake, is that envy is sadness at another person’s good fortune. While suffering leads us to ask the question “why me?” Envy leads us to ask “why not me?”

Lust Versus Pure In Heart

When Moses came down off the mountain with the Ten Commandments, he said to the Israelites, I have some good news and some bad news. The good news is I talked God down from 30 rules to only ten, and the people got really excited about that. But the bad news is, Moses said, that adultery is still one of them. 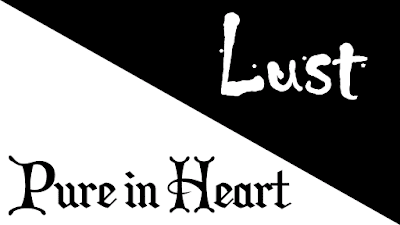 Perhaps, appropriately enough, today we continue in our series on the Seven Deadly Sins and the Beatitudes looking at the deadly sin of lust against Jesus’ statement that blessed are the pure in heart for they shall see God.  When Donna, who is our office administrator, sawthis week’s topic she said to me, so after everything that happened last week, you’re going to be talking about lust? Who says that God doesn’t have a sense of humor? Maybe God does, or perhaps no matter when we were talking about this issue there would have been something taking place in the news that would point out not only the dangers of lust, but also the hypocrisy that we have when it comes down to the issues that surround lust.  Because while we as Americans have tremendous hang-ups on the issues of sex and sexuality, we also simultaneously are surrounded by it.  Not because it’s being pushed down our throats by uncaring advertisers and pop culture makers, but because they are doing that because it works and will either get them more sales or at least more eyeballs, and thus more money. Lust is a major part of our culture, because lust is about a lot more than just sex because we can lust for lots of different things.

“Ladies and gentleman, greed -- for lack of a better word -- is good. Greed is right. Greed works. Greed clarifies, cuts through, and captures the essence of the evolutionary spirit. Greed, in all of its forms -- greed for life, for money, for love, knowledge -- has marked the upward surge of mankind. And greed -- you mark my words -- will not only save Teldar Paper, but that other malfunctioning corporation called the USA.” Most of you probably recognize that speech by Michael Douglas from the 1987 movie Wall Street. What might be less known is that the speech was not really the creation of the screen writer of the film, but instead came from the person on whom Douglas’ character was based, Ivan Boesky. Speaking at the graduation ceremony for the business school at the University of California at Berkley, Boesky said, “Greed is alright, by the way. I want you to know that. I think greed is healthy. You can be greedy and still feel good about yourself.” That was just a few months before he would be arrested by the SEC for insider trading to which he would plead guilty to one charge and pay a then record individual fine of $100 million. But before all that happened, he turned against his former compatriots and while collecting information against them for the SEC was allowed to continue doing insider trading making millions in profits until the SEC had enough information to also indict Michael Milken who was then forced to pay what is still the record individual penalty of $600 million. In response to the actions of wall street in the 80’s, congress passed a law that called for life in prison for certain financial crimes, and if you are wondering how many bankers or wall street execs have been subject to that penalty, the answer is less than one. Who says that crime doesn’t pay, and that greed is not good? 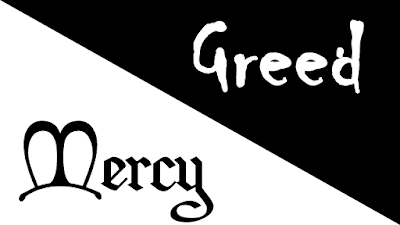 Or at least that’s what we’re told, and at the very least shown. Make as much money as you can, buy as much stuff as you can, exercise or gain as much power as you can. If you are rich, you are good. If you are poor, you are bad. And of course we all know that if we make lots of money and drive the right car and live in the right house and even drink the right beer then we’ll all be happy and will attract the most beautiful member of the opposite sex right? And if you can’t actually afford to live that lifestyle, it’s still all attainable, just buy it all on credit, because no one really knows how much money you’re worth and so if you can show how successful you are through how much stuff you have, how much gold you own, then surely you have to be successful because we do indeed judge people not on who they are, but how much they make and what they own, and unfortunately we judge ourselves the same way. We think our salaries, or lack thereof, are a reflection of who we are and what we are, and there is the crux of the problem of greed, the deadly sin we are looking at today in comparison to Jesus injunction that the merciful are blessed and that they will receive mercy.

Gluttony Versus Hungering and Thirsting For Righteousness

At the beginning of the Gospel according to Matthew, we are introduced to John the Baptist and are told that he wore a camel hair coat, which was not very comfortable, to say the least, and that his meals consisted of “locusts and wild honey.” I’m hoping that the honey makes the locusts a little more palatable, but I don’t really want to try it to find out. What these statements about John tell us is that he was living the lifestyle of an ascetic, or someone who denies themselves of any worldly pleasures in order to try and contain and control, or tame, the body.  Around the third century, some Christians started moving out into the Egyptian desert to live solitary, ascetic lives, to replicate what John the Baptist had been doing, in the hope of dedicating their full lives to God, and to do that to cut everything out of their lives they thought was unnecessary, or distracting to them. And so like John the Baptist, they limited not only what they ate, but the amount they ate as well. Known as the desert fathers and mothers, they began what we now know as monastic communities.  They were also the ones to talk about the sins that would become the seven deadly sins, which includes the sin of gluttony. It is also then little wonder that it is Pope Gregory the Great who does the final compilation of this list of sins and begins promoting them since he is the first pope to come out of the monastic community and thus had been steeped in their ideas, so that even while he was combining and eliminating different sins that he would leave in the sin of gluttony, the one sin that truly deals with ascetic lifestyles, or the lack thereof. 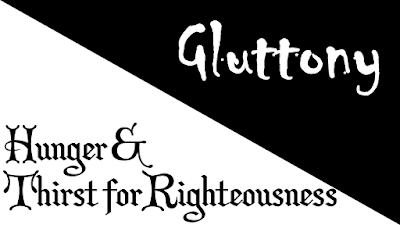 Now gluttony is probably the hardest of the sins that we will deal with, at least for me. In our new Wednesday’s with Wesley group this week we were talking about Wesley’s advice for Methodists, as well as his general rules, and we were talking about that there are some rules that it’s really easy to say we will follow, but they are the ones that we don’t have any problem with to start. But the rules that actually apply to the things we really do, or want to do, those are the ones we dismiss or say they don’t really apply anymore or we make excuses about why they don’t apply to us, or why we aren’t really violating them. I want to do that with gluttony, as I’m guessing most of you do as well, because whether we want to admit it we are all gluttons at one point or another, although we are much more likely to point out this sin for others.