Giving All You've Got

Here is my sermon from Sunday. The scripture was John 15:12-17 and based on Star Wars: Rogue One.

When we think of the word love and when we talk about love, the most common reference is that of romantic love or the love we feel for our families. The love that’s expressed in Hallmark cards and Lifetime movies. It’s not necessarily physical love, but it does make us feel something different than what we feel for other people, and thus when we hear that we are to love everyone, or that, as the Beatles prophetically said, all we need is love, and we realize how difficult or impossible it is we begin to despair thinking that perhaps we aren’t worthy. That perhaps there are people who are capable of doing this, but we aren’t, and are thus failures. It’s as Father Zosima said in Dostoevsky’s The Brothers Karamazov, “The more I love humanity in general, the less I love man in particular.” Or worse, we begin to think that maybe Jesus wasn’t actually being serious about this, that it was hyperbole, just as he said that we should rip out our eye or cut off our hand if it causes us to sin. It’s there to help us to understand the seriousness of the command, but to understand that it’s not really what he is saying to do. 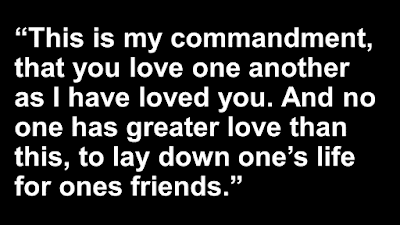 Now there are multiple different words in Greek that are translated as love. One of those words is eros, from which we get the word erotic, that touchy feely love, but that is not the word that is translated here that Jesus is using. Instead, the word here is agape, which when translated into Latin was caritas, from which we get words like charity. That is that this is not a feeling that we are supposed to have for one another, this is a doing, a way of being. So, while we can have eros for a few people, we can have agape for everyone. And I think it’s crucial to pay attention to the fact that Jesus does not say this is a recommendation, or even just come out and say love one another. Instead, what does he say? Let’s read it together. “This is my commandment, that you love one another as I have loved you. And no one has greater love than this, to lay down one’s life for one’s friends.” This is a commandment. The reason why the Thursday of Holy Week is called Maundy Thursday is because this passage is read, and Maundy comes from the Latin word Mandantum, meaning commandment. Jesus commands us to love one another, just as we have first been loved. And so, we are going to be looking at that idea as we conclude our all too brief sermon series on the gospel in Star Wars, although perhaps some think it’s been too long, by looking at the last of the Star Wars films to come out which was Rogue One.

Here is my sermon from Sunday. It was based on Romans 8:31b-39 and Star Wars: Return of the Jedi.

When people are asked to name the best villains in movie history, Darth Vader is consistently near the top of the list. He is easily responsible for hundreds of deaths, and that’s before we begin to talk about the entire destruction of the planet alderon. But one of the things that separates Vader from the other top movie villains, people such as Hannibal Lecter or Norman Bates, is that he is not psychotic, or at least to me Vader doesn’t appear to be psychotic. Now I could be wrong on that, and I’m not saying he’s a good guy. He’s not, for example, Atticus Finch, from To Kill a Mockingbird, who tops the list of the best movie heroes. He seems more like Nurse Ratched from One Flew Over the Cuckoo’s Nest, or Mr. Potter from It’s a Wonderful Life, who are not mentally ill, they are just mean and nasty people. Perhaps that’s even worse because it means that they intentionally chose to be the people they were, and they are not people you want to invite over for a dinner party. But the question we have to ask ourselves, and the question we will seek to answer today is whether these nasty people, these villains, because of the choices they have made in their life have moved beyond God’s grace and redemption, and we will do so by looking at the film that completed the original Star Wars trilogy Return of the Jedi, which is my personal favorite film. 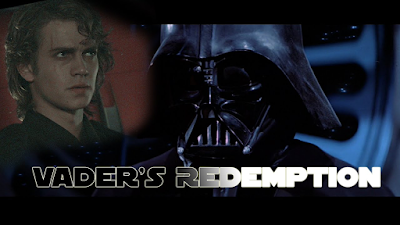 Released in 1983, Return of the Jedi has the empire working to rebuild the death star, but it begins in the palace of Jabba the Hutt, sort of the Godfather of a crime syndicate, who has Han Solo encased in carbon and hanging on his wall, and so Luke, Chewbacca, Leia and Lando Calrisian undertake a rescue operation that eventually leads to Jabba’s death at the hands of Leia. Intelligence, and a trap set by the emperor, then leads the rebels to the forest moon of Endor where the new death star is being built and is protected by a shield being generated on the moon’s surface. While Han, Leia and Chewie make their way to Endor, where they encounter the Ewoks, a race of small teddy bear like creatures who will help them in their battle with the empire, Luke goes for some final training with Yoda, who dies, but not before revealing that Princes Leia is Luke’s twin sister, and thus the daughter of Vader. Luke eventually joins them all on Endor, voluntarily surrendering to the imperial troops so he can meet with Vader, who takes him to the emperor. Vader and Luke again engage in a lightsaber duel, but Luke puts his weapon away because he will not kill his father and he finally realizes Yoda’s lessons about violence and the dark side, and when he refuses to fight, the emperor then seeks to kill Luke himself, but I don’t want to give away the ending just yet, as it works into the understanding of redemption. But two issues to point out.

Here is my sermon from Sunday. It was based on Genesis 4:1-9 and the movie Star Wars: The Empire Strikes Back.

Today we continue in our series on the Gospel in Star Wars by looking at the Empire Strikes Back. Released in 1980, it is widely considered the best of the Star Wars films, although it is not my personal favorite. After the rebel alliance had destroyed the death star at the battle of Yavin at the end of the first film, the empire strikes back, as the title says, and seeks out to find and destroy the rebels who are now hiding from the empire. After their base on the ice planet of Hoth is attacked, they retreat again, with Luke Skywalker going to the Dagobah system to receive instruction from Yoda, the last remaining Jedi Master, and put in a different order, his words are, therefore making him sound super smart. Meanwhile, Han, Chewie and Leia are being pursued by the evil Darth Vader when the hyperdrive on their ship won’t work and so they retreat to the cloud city of Bespin, controlled by an old friend of Han’s, Lando Calrisian. Calrisian betrays them to Vader who uses them as a trap to get Luke to come to their rescue, where he and Vader engage in a lightsaber battle, with Luke losing his hand, and where Vader reveals, and I hope this isn’t a surprise to anyone any longer, that Luke’s father was not killed by Vader as he had been told, but that Vader himself is his father, and along the way Luke learns somethings about the force and himself that turn out to be important as well, and we are going to use this is a way to discuss the issue of predestination versus free will and our relationship with sin and the dark side. 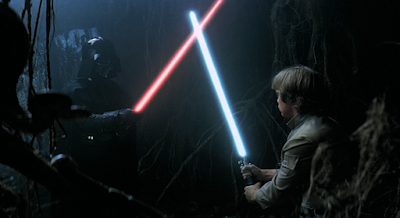 Now the Star Wars movies play both sides of the card when it comes to whether things are predestined or not. In the later prequels, when Qui Gon Jinn meets the young Anakin Skywalker for the first time, Anakin makes a remark about how fortunate that they had to land where they did to get their ship repaired, and Jinn says “Our meeting was not a coincidence. Nothing happens by accident.” And then of course there is both Vader and the Emperor, known by his Sith name as Darth Sidious, who tell Luke that it is his destiny that he join the dark side and rule the galaxy. Of course, that doesn’t happen, putting a question about whether everything is in fact destiny, and then there is what Yoda has to say. Now I think we could do an entire sermon series on the wisdom of Yoda, who really does have some of the best lines, like Size matters not, do or do not, there is no try, and better yet, fear leads to anger, anger leads to hate and hate leads to suffering, but about destinies, Yoda says that the future is impossible to see, or as he says in the Empire Strikes Back, always in motion the future is. That means we can’t predict the future because there are too many variables, too many choices that people can make, to be able to determine the future outcomes. So, which do we believe?