Here is my sermon from Sunday.  The text was Luke 10:38-42.  I was in the hospital recuperating from emergency surgery, so I am grateful to my wife who delivered this sermon for me.

A few years ago there was a story in the Boston Globe, and I’m sure it was covered here in the Journal as well, but it was about a study conducted by a group of researchers from England that found that we are walking on average 10% faster now than we did ten years ago.  I happened to see this particular copy of the Globe because my neighbor got up late that day (some of you will get that on the way home).  What the study also found was that those areas of the world that have the fastest growing economies also have the greatest increases in the speed at which people walk.   So people in cities in China are walking 20 percent faster than ten years ago, and people in Singapore are walking 30 percent faster.  In other words as other areas of the world try to catch up with the west economically they are also trying to catch up with us in the speed at which we lead our lives.

We live in a culture which operates on a 24-7-365 schedule.  It is a world where everything seems to happen as quickly as it possibly can and in which if you slow down for even a second it seems as if you are liable to lose everything.  We live in a time when you can have a conversation with someone half way around the world about a document that you just sent to them a few minutes.  In fact, that same document would take just a couple days to reach London via the post office, and yet we call that snail mail, because it just isn’t fast enough.  Have you ever noticed if someone hasn’t answered an email within ten minutes from the time which we sent it we begin to wonder what’s going on, why are they being so slow?

What Are The Other Half Doing?

There was a news story that came out today from the United Methodist News Service from a survey done of UMC that found that half of the clergy reported significant stress from their jobs.  And that made me wonder what the other half of the clergy are doing, or not doing, that they are not feeling stress?  Stress just seems to come with the territory, sometimes less and sometimes more, but can you really be in the ministry and not feel stress?  Doesn't seem likely to me.

I haven't posted in a long time as we have been moving and changing churches so have been preoccupied with other things, with a lot of stress, but now that we are in and getting settled I hope to begin posting regularly again, as well as posting all the sermons that didn't get put up in the interim.

At Play in the Fields of the Lord

In 1906 Vilfredo Pareto, who was an Italian economist, noticed that 80% of the land was owned by 20% of the people.  He then later observed that 80% of the peas in a garden were contained in only 20% of the pea pods.  This led him to postulate a theory now known as the Pareto Distribution.  This theory was later applied to the business world by business consultant Joseph Juran who stipulated the rule as we know it, which is commonly referred to as the 80-20 rule. While the 80% has no mathematical significance, it has been found that in systems of distribution that the imbalance point will be right around 80%.  80% of your profits will come from 20% of your customers, 80% of your complaints will come from 20% of your customers, although not the same 20% who are spending the most money,  80% of sales come from 20% of the products.  Computer programmers have found that 20% of the bugs cause 80% of the software crashes, and safety personnel have found that 20% of hazards cause 80% of the accidents.  The question for us is whether it’s really true, although it certainly feels that way, but even more importantly is that the way it has to be?

The passage we just heard from Luke is a pretty famous one with the claim that there is much work in the harvest, but few workers.  This is usually taken as sort of a truism, yet another confirmation of the 80/20 rule, that even in the church there is too much work to be done, and too few workers to do it all, or too few who do all the work.  And if the Bible says it then it must be true right? But is that what this passage actually says?  Is Jesus simply telling us that it is the lot of the church for 80% of the work to be done by 20% of the people, and 80% of the money to be given by 20% of the people, about 80% of the complaints to be done by 20% of the people?  In my experience on the complaint front it’s actually smaller, it’s probably 5% who do 95%, although please don’t try and prove me wrong by having more people begin doing more complaining.

Swing low, sweet chariot, coming for to carry me home, swing low, sweet chariot, coming for to carry me home.  That famous song comes from the passage that we just heard from 2 Kings, in which the prophet Elijah is taken up into heaven in a flaming chariot.  And with Elijah’s departure, Elisha becomes the leading prophetic voice in Israel.  This story representations a transitional point in the life of Israel and in God’s proclamation to God’s people, just as today also represents a transitional point in the life of this congregation with the ending of one pastorate last week and the beginning of another one today.  It has been said that every minister is guaranteed to make everyone in the congregation happy at least once, some when they come and some when they go.  Or as Casey Stengle, the Hall of Fame manager of the New York Yankees, my team by the way said, the secret to being a good leader is to keep those who don’t like you away from those who are undecided.  The simple truth though is that no minister is as ever as good as some people think they are, nor as they as bad as others think they are, and we can certainly see this represented in scripture as well. 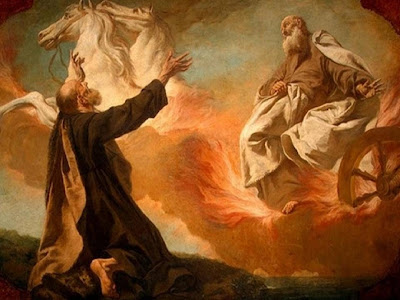 I’m sure there were plenty of people who were quite thrilled to see Elijah go away, in particular Ahab and his wife Jezebel who were the subject of Elijah’s proclamations, and they looked forward to seeing what Elisha could do, and there were others who mourned Elijah going and did not look forward to Elisha’s leadership and never found him as good as what had come before.  I have no pretensions that I will make everyone here happy.  There are going to be times when we get along, and there are going to be times in which we are at loggerheads with each other, and that’s okay.  You don’t have to agree with everything I have to say, nor do I have to agree with everything you have to say, and to be honest if there is not a time at least once a year in which I don’t push you beyond your comfort zone, and leave you thinking about different things, which may lead you to being mad with me, then I am not doing my job.  There are plenty of churches which will tell you that you have to agree and subscribe to everything that the minister has to say, and if you don’t then you are welcome to go somewhere else.  That is not who the United Methodist Church is, nor is it who I am.