Today we conclude our series on the 7 last sayings of Christ. We have extinguished the flames, as is tradition, of six candles representing six of Jesus’ words, and just the last word we hear from Luke remains. Matthew and Mark show the anguish and suffering of the cross in Jesus’ cry from the 22nd Psalm of “My God, my God, why have you forsaken me?” That is the only phrase that they have Jesus say from the cross, and represents the only saying found in more than one gospel. John has Jesus showing the ironic exultation of the cross and the completion of God’s plan for why Jesus was sent, the lamb who came to remove the sins of the world. It begins first with the creation of a new community in Jesus entrusting his mother and the beloved disciple to each other, and then uttering I am thirsty, reminding us to be careful of what we thirst, and then saying “it is finished,” as a celebration of the end of his journey on earth, but the beginning of a new chapter that also invites us to be involved. And then there is Luke. We began by looking at Jesus’ proclamation of forgiveness from the cross for those who were killing him, as well as saying to one of the other men being crucified that he would join Jesus in paradise. This call to forgiveness and compassion also matches Luke’s gospel and his conclusion with Jesus saying, “Father, into your hands I commend my spirit.” 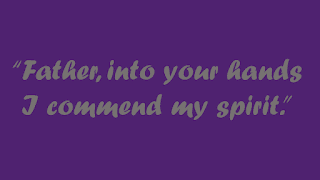 We should notice here that, like Matthew and Mark, Jesus doesn’t say this phrase softly but instead utters it with a loud cry. But these are two different cries. In Matthew and Mark, after he cries out in despair, Jesus then lets out another loud cry and breathes his last. Now it might appear that Luke is giving actual words to what this cry is, and there are some arguments that are made for that fact. But, as I have said before, the better way to see this is to simply let each of the gospel writers tell their story and not try and mash them together, because it can’t be done. Just as another illustration, in Matthew and Mark, the curtain of the temple is torn in two, from top to bottom, after Jesus dies. In Luke, as we just heard, the curtain is torn in two before Jesus dies. let each gospel writer speak for themselves in what they want to emphasize, because Luke has a lot to say to us in the story he tells, especially in stories that are unique to his gospel.

I Am Thirsty... It Is Finished

I’ve always thought that living in the desert gives us a different perspective on scripture from those who live in areas where water is not as big of a concern. When you have seen a completely dry river bed turn to a flowing river several feet deep in just a few hours, then when we hear the prophet Isaiah say that God will make a new thing, that there will be rivers in the desert and pools of water, we understand the significance of that reality and what it means for survival. When you are used to having plenty of rain and everything is green all the time, that passage just doesn’t have the same significance for those of who have known parched lands, parched skin and parched tongues. And so perhaps we can also understand Jesus’ cry from the cross here in John that he is thirsty. After all, he’s hanging on a cross, in the afternoon sun, in the desert, so of course he’s thirsty, and except for the hanging on the cross part, I’m guessing that most of us have been there as well, and have probably even said something like, “Man, I’m thirsty.” Hopefully we also received some release, either through our getting something, or through the assistance of someone else, which is what happens here as Jesus is given some sour wine. 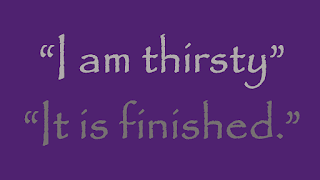 Now the passage says “they” gave him wine, and it’s not clear who the they are. It could be his mother and the other women along with the beloved disciple, who are standing at the foot of the cross as we talked about two weeks ago. This is possible because there is not any mocking with the offer of one as there is the synoptic gospels when the soldiers try and give him wine. But, tradition has held that it’s still the soldiers who give him the wine, and we might notice that since there isn’t any mocking perhaps this is a gesture of mercy on behalf of the soldiers. One of the things that indicate that this might be the soldiers is the fact that the wine that was mentioned, which is translated as sour, was a special type of wine used by soldiers, that was cheaper than regular wine and also more potent in relieving thirst. Of course, it was also used by peasants, so that clue is still not definitive. But several points here. The first is that while there is reason to spiritualize this statement about his thirst, and we’ll come back to that, we should also just see this as real thirst which highlights the violence and brutality of the cross. One of the things that John does is to heavily emphasize the divinity of Christ, and so when we see the human side we should recognize that. Similarly, when the synoptic gospels show the divine side, we too should recognize that, because Christian belief is that Jesus is both human and divine. It’s not half and half, but fully human and fully divine. We all tend to have a side of that that we prefer, which leads us into heresies, and so we need to keep the human and divine elements both present.

My God, My God, Why Have You Forsaken Me?

have to admit that today’s last word from the cross is one of my favorite passages of scripture. That might sound strange to some of you, but I love it because I can puzzle and struggle with it, but it also brings me a great deal of comfort and solace. Of the 7 last sayings of Christ, it is also the only one in which it is contained in more than one gospel. All of the other sayings are unique to the gospel in which they are found, but Jesus’ cry of despair is found in both Mark and in Matthew, and this is the only thing that either of them have Jesus say from the cross. In fact, their crucifixion stories are remarkably similar, with a few more details being added by Matthew over the sparsity of Mark. But, what 50% of the gospels say is that while hanging on the cross that Jesus cries out, he doesn’t mutter, he doesn’t mumble, he doesn’t say it under his breath, he cries out in a loud voice, to make it very clear, “Eloi, Eloi, lema sabachthani?” which means “My God, My God, why have you forsaken me?” That is a phrase that could never comes from the lips of the Jesus in the Gospel of John, a thought we’ll return to next week, and while Luke has him cry out in a loud voice, what he cries is something entirely different. 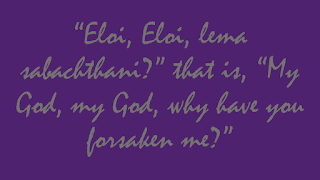 Now in some ways, just like Jesus giving forgiveness on the cross in Luke, having Jesus’ cry of despair, or his lament, matches perfectly with what we say about the major themes of Mark, which Matthew continues over in part into his own gospel. Additionally, it matches with the story of Jesus in the garden the night before. Just before he is arrested, he is in the garden of gethsemane with Peter, James and John and he tells the disciples to remain and to pray and to stay awake while he goes off to be by himself. And what do the disciples then do? They fall asleep, again a sign that they don’t truly understand the call to discipleship. But Jesus goes off to pray to God and he says “Abba, Father, for you, all things are possible; remove this cup from me; yet, not what I want, but what you want.” Now, last week I said that there is no punctuation in ancient Greek and so when translators are putting the manuscripts into English they have to guess where the punctuation should be. And there has been an argument made that in Jesus’ prayer here that it should actually include an ellipses here so that there is a long pause between Jesus asking God to remove the cup from him and then saying, not what I want, but what God wants. I think there is a lot to be said for that argument, first because this prayer has to be longer to allow the disciples to fall asleep, and second because it seems that Jesus needs to give some time for an answer to be given, of which he doesn’t seem to receive an answer. But to key points that also go along with this prayer.